This mug is beyond giant, this mug is an absolute BEHEMOTH! this mug is so big that it will hold nearly 2 litres of coffee! (1800ml to be exact) so that’s 6 cups of regular coffee!

This huge mug is hilarious as well because on the front is the message “I’ve cut back to just one cup of coffee a day” with this mug you honestly can have your cake and eat it when it comes to new years resolutions.

A days worth of coffee in one hit! 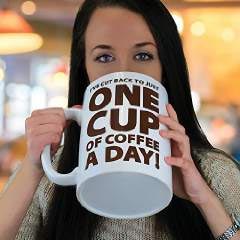 This is a very positive Mug that will keep you motivated on the most miserable of days.

It’s a Giant Mug Of F**K Yeah which is a very American phrase and is usually shouted when something goes your way.

F**k Yeah can be shouted in many different situations and this mug will remind you of those happy F**k yeah moments.

This mug has a giant 600ml capacity is ceramic and is microwave and dishwasher safe. Now, are you going to buy this mug? 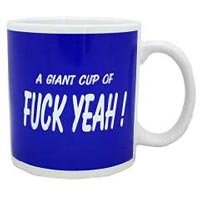 Have you seen Dave?

Did that invoice get paid?

I would bang sally the secretary would you?

Do you know anything you ignorant ****?

Right, I have a gun to your head if you say who the f**k knows I’m going to blow your brains out!

Your annoying colleague’s brains go flying across the office and you have just got yourself a life sentence but there is a better way to solve your colleague’s annoying habit give him or her this giant mug emblazoned with “who the f**k knows” this mug will remind them on a daily basis of how annoying they are. 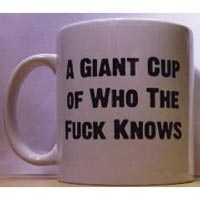 A great gift for any Tea loving Arsenal fan you might know, this mug is an official piece of Arsenal merchandise.

The mug features “Arsenal” around the body with the Arsenal logo.

This mug will hold an enormous amount of hot drink, is gift boxed, dishwasher and microwave safe. 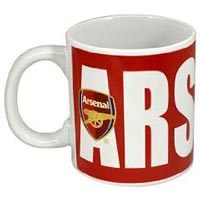 Assassins Creed has dominated the games market for the past decade with 9 releases in the main series and 11 other games the action-packed fictional history sure is popular with hundreds of thousands of fans worldwide.

If you’re an Assassins Creed fan or know anyone who is then this mug is for you. The mug features a print taken from Assassins Creed IV of Edward walking on the shore away from the ship.

Of course, the mug has a giant capacity and is microwave and dishwasher safe, although please dishwasher at lower temperatures to avoid fading. 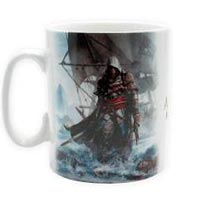 Bad decisions do make good stories like the time a friend went out on a mission to get absolutely plastered and to go home with one of the lovely ladies on offer at the local nightclub.

He did get plastered…

He woke up next to this lovely lady…

They were all naked…

And my friend had a very very sore bottom…

He has never got over this incident to this very day, his decision to go out and get plastered and cop off with one of the local ladies was a bad one, but it did, however, make a very good story.

So I gave him this giant mug

The mug is a pleasant green with the words “bad decisions make good stories.”

Has a 625ml capacity

And is microwave and dishwasher safe

Know anyone who made a bad decision and made a good story? 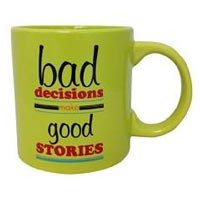 if you’re old enough to remember that song then you will remember the retro Batman Cartoon from DC comics.

Here is an officially licensed DC Comics Giant Batman mug with a retro Batman logo.This mug is huge with a 750ml capacity and is microwave and dishwasher safe and comes in a cool comic gift box. 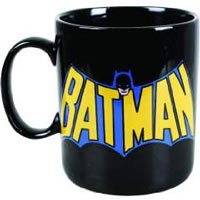 “A short while ago there were 3 employees, useless lazy employees for the big bad boss to give a bollocking”

“So she got the Boss this Big Boss Mug”

“The Boss was so happy he gave her a hug” 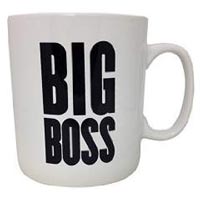 Get some chocolate nostalgia in your life with this Giant Mug featuring many a classic Cadburys chocolate wrappers from the good old days.

this mug has a blue stripe running around the top and bottom with retro images of the following chocolate bars. 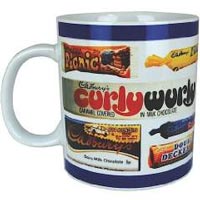 This mug was released for the much celebrated 50th anniversary of the hit TV sci-fi drama Dr Who.

The mug has a giant capacity and features Daleks on a grey background. 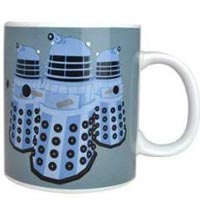 The Tardis was created by the Timelords as a means of travelling through time and space, The Tardis looks like a police phone box on the outside but inside are lots of different rooms including the famous console room.

This official Dr Who Giant mug is decorated with the Tardis flying through deep space on the outside and has a hidden Tardis on the inside!

How is this possible?

A 3D Tardis has been created in the base of the mug the more you drink, the more Tardis you see.

A must for any Dr Who fan, please don’t dishwash 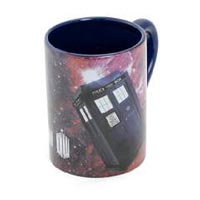 Here we have another Giant Mug but this one is unique as the outside has been covered in blackboard which means you can write anything you want on the mug with chalk.

You can write your drink order on the mug, for example, tea with two sugars.

You can write messages to those sitting around you

You can write a short story

You can write anything you want really 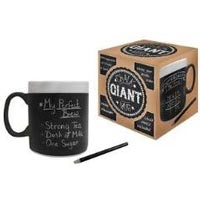 Bruce Banner was a 129-pound weakling who got blasted by gamma radiation and after that whenever he got stressed he turned into the monstrous 1040 pound destruction machine that is the Incredible Hulk.

This mug was a standard 250ml white mug but got blasted by gamma radiation and is now a monstrous 600ml capacity featuring a muscular green body and arm for the handle.

This mug is just like the Incredible Hulk, it holds an Incredible amount of tea and is Incredible to drink from. 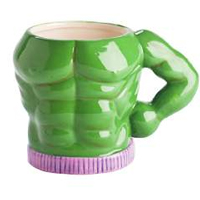 Giant Mug Of Shut The F**K Up

We all know someone who can do with a giant mug of shut the f**k up so here’s one which can also be personalised to include the name of someone special.

Give them this mug and they will get the message

Click Here For Giant Mug Of Shut The F**K Up 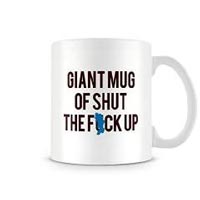 You’re probably are not aware but we have just gone through the Unicorn era a term used to describe a period of time where lots of money was chucked at silicon valley startups by investors betting on Unicorns.

What has this to do with mugs? absolutely nothing! you are not a silicon valley startup, investor or unicorn but you do want a giant mug and this unicorn mug is huge! with a 900ml capacity!

The Unicorn mug features a mythical gallant beast with a horn protruding from his forehead with the backdrop of a rainbow and the words “magic coffee power!”

A prime example of WTF? but a huge mug none the less that will hold three loads of Tea or Coffee 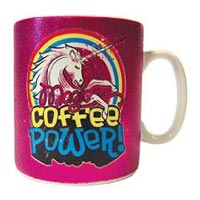 This Giant Mug is colourful but a bit of a funny one, on the front are the words “my mug is considerably BIGGER than yours” (which it will be this mug is huge) then on the other sides are summaries of what this bad boy can actually hold.

And most important of all one and a half pints of a liquid of your choice!

Which is around 850ml, microwave and dishwasher safe 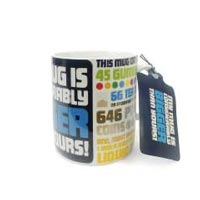 A group of kids from Oregan discover an old treasure map and go underground in search of a legendary pirates treasure with the criminal Fratelli family on their tails who also want the fortune at the end of the treasure map.

This Giant Mug has been dedicated to Lotney “Sloth” Fratelli the retarded, deformed but lovable hero of the hit film.

The mug is decorated with the “Super Sloth” inside and outside with a picture of Sloth on the front with a retro dot background.

Officially licensed merchandise, a must have for any Goonies fan. 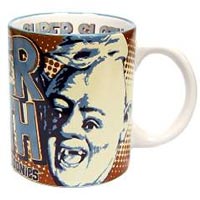 The morning after 8 pints of Stella and 6 Jack Daniels and Cokes your head is banging your groaning and boy are you dehydrated, you need a cup of tea or ten to start you on the long road to feeling normal again.

So why not make yourself 3 cups of tea in one mug with the Giant hangover mug? This mug is huge just drop in 3 tea bags or 3 spoonfuls of coffee add water and milk and away you go.

The mug has a lovely picture of empty bottles and glasses with “hangover mug” in scribbled style writing on the base of the mug are the words “do not disturb” which will let everyone in the vicinity know to leave you well alone.

The mug is black with white images and writing, microwave and dishwasher safe also gift boxed, a great gift for a pisshead! 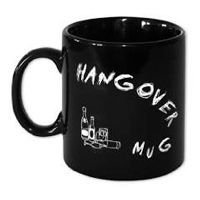 I Am The Boss

See this mug? What does it say? It says “I am the boss!

Notice how this mug is more significant than yours?

It’s because I am the boss

I am bigger and better than you in many ways

I am higher up in the company than you

I earn more money than you

I have more respect than you

My car is bigger than your car

My house is bigger than your house

My mug is bigger than your mug

I am the Boss

And don’t ever forget it

Click Here For I Am The Boss Giant Mug 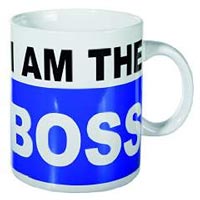 WE’LL JUST DO THINGS MY WAY!

Everyone has been in this situation at one time or another, and for those of you who currently have to answer to the boss then this is what you must get them for the next secret Santa.

This Giant mug comes with a matching keyring, so your Boss gets two gifts in 1

He or She will be so impressed they will give you a promotion and pay rise!

Dishwasher and Microwave safe a good mug for the workplace 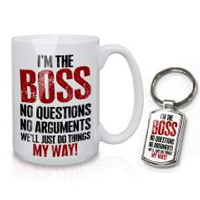 Ever since Ray Winstone in the 1979 film “Scum” took control of the borstal by giving his opponents a good hiding the phrase “who’s the daddy” has been used in the event of many victories no matter how big or small.

“The Daddy” is, of course, the top dog, are you the top dog? if you’re not at the top of the food chain at home, at work or in your group then find another mug.

This mug is for true champions ones who can truly call themselves the “Daddy.” 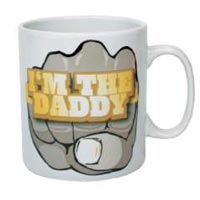 This giant mug features a character that looks something between a dog and a minion making bacon pancakes with a brown background, who knows this mug might even inspire you to make bacon pancakes.

Bacon pancakes are simple just make pancakes and put bacon in them then make yourself a nice double serving of tea with this massive 568ml mug. 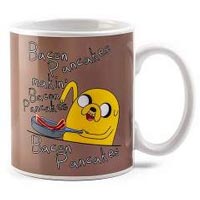 The phrase Nothing But Trouble is a popular one it has been used for a film title, where Dan Aykroyd played a 106 year and judge and the film was nothing but trouble. it was a complete flop and lost a lot of money.

The phrase has also been used for a song by Lil Wayne and Charlie Puth, a book by Rachel Gibson and now the phrase has been slapped on a giant mug.

The Mug has ‘Nothing But Trouble’ written on the front in yellow, green and orange writing the mug is ceramic and features a giant 625ml capacity. 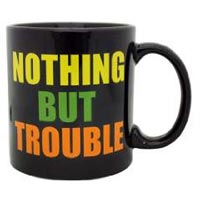 Oscar The Grouch was a grumpy furry character that lived in a bin he had an obsession with hoarding useless items and he was green, remember sesame street? this mug is officially licensed from the hit TV show.

The mug has a green background (just like Oscar) and features a photo of Oscar in his bin and “I’m A Big Grouch” on the other side of the mug is the Sesame Street Street sign tastefully done in white. 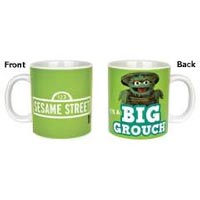